Posted on December 13, 2010 by Elizabeth Richie 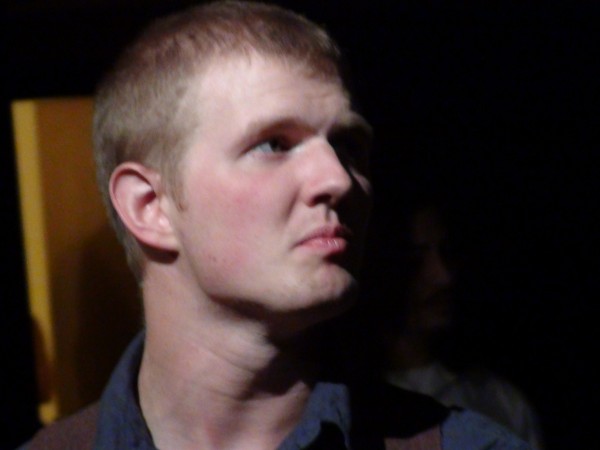 Isaiah as the Dear Hunter in Dear Ms. Leading

Sunny Greetings!  Welcome to Wellnessandspirituality.net where we love to talk about— You guessed it—Wellness and Spirituality, which of course, means considering CREATIVITY! We are, after all, the Co-Creators!

Bravo! Bravo! Bravo! The 600 miles (from WV and back) I traveled yesterday was 1000 % worth it– to see a remarkable rock opera derived from a series of concept albums collectively called The Dear Hunter. With lyrics and music composed by the talented Casey Crescenzo,  the opera plot  drew from Act II: The Meaning of and All Things Regarding Ms. Leading–and was the senior workshop brain child of a young man, Reggie Jose, a student at Fairmont State University. With the help of my son, Isaiah, and a cast and crew of diverse and devoted individuals from the theater department, they put together a thoroughly impressive showing. My son had been serendipitously cast as the male lead at the last minute and up until he “tried out” he’d never met anyone in the theater department.   It was one of those “friend of a friend of a friend” things!

Reggie had been a long time fan of  The Dear Hunter, and the first step in creating a rock opera from it was to contact the composer, Casey Crescenzo, ask his permission and see about obtaining music. Crescenzo kindly recreated the soundtrack in his home studio and Reggie used a digital vocal removal process to get the vocal-less tracks. Reggie also edited the music to fit into the staging of the story.

As I understand it, the original albums had not been conceived originally as an opera, but the storyline and characters were well developed.  Nevertheless, Reggie and company had to create the entire staging of the opera to portray the storyline and they chose to work without any dialogue, relying soley on the music and staging. Reggie did, in fact, create a character called The Narrator and played and sang the role himself….in fine fashion I might add.  Certainly a man of many talents!

Driving the 300 miles to Fairmont, I finally had a chance to listen to the music my son had given me. I was impressed with the complexity of it all and the interweaving of strong melodies. It was a classic story of star-crossed lovers and the music rose to the occasion with a passion! Hearing my son sing some of them was wicked sweet!!!

This performance  was a dress rehearsal so there were only a  dozen or so  folks in the audience. Since it was a “workshop” format, the audience was asked for comments after the show and two theater professors gave their “constructive input.”  One explained that many shows go through innumerable “workshops,” traveling about the country, until they are finally perfected.  After all, the creative process is not always  like an instantaneous inspiration birthed whole, but often like a baby that grows slowly to maturity.

I can REALLY see this infant production of Ms. Leading growing into something truly magnificent and memorable.  I can see it in a class with loves stories such as Phantom of the Opera and Moulin Rouge. The music is more sophisticated than that of the familiar rock opera, Jesus Christ Super Star. Also, when  watching it, I  thought of it as rather strange and it reminded me of rather weird classical opera, Doctor Atomic.

In any case, I applaud everyone who helped in  collaboration with Reggie. Watching all the young creative juices flowing was such a delight! And my son had a blast.

This is what life is all about: the sheer thrill of creativity. We are told in the Bible that humans were made in the “image of God.”  But what is meant by the “image” of God? It’s clear to me that “image” refers to Divine Creative Intelligence and Force within each human being. And unless our lives allow us to express this creative force, we will not fulfill our destiny. Moreover, the stifling of this Divine Creative power threatens one’s happiness and indeed, one’s health and one’s total life purpose. Thereby, society suffers and all humanity is short changed.

Maya Angelou once said:  In today’s climate in our country, which is sickened with the pollution of pollution, threatened with the prominence of AIDS, riddled with  burgeoning racism, rife with growing huddles of the homeless, we need art and we need art in all forms.  We need methods of art to be present, everywhere present, and all the time present.”

Seeing this wonderful production yesterday reinforced in my mind the very vital function, the pricelessness of  artistic expression.  It fed my soul/spirit and I am sure everyone involved is the richer for it.  Moreover, when we seek to be creative and to see the Creator in each other, not just on the stage or the concert hall, but in every facet of life, we are truly allowing  the image of the Divine One to fully manifest wholly here on Earth.

As Grandmother Pa’Ris’Ha says: “Creator is unfolding in everyone you encounter. Greet all with respect and kindness.  All are Creator!”

I want to thank Reggie and Isaiah and ALL the other cast and crew members for such a wonderful GIFT of joy that I experienced yesterday.

This entry was posted in Wellness and Spirituality. Bookmark the permalink.